A Heartfelt Thank You

I wish to thank all of you, my Marketing University family, for your kind wishes, thoughts and congratulatory messages regarding my retirement.

A special thank you goes out to Armand, Marianna, Chris, Bill, Bret and all who put out the January issue of Traces magazine and all of you who contributed pictures and comments. Mar- ianna and Chris told me there were more pictures and comments than they could publish.

Traces is normally a 16-page publication. They increased it to 20 pages for my retirement issue! I was in shock. In no way, shape or form did I expect anything near to what was in that issue. Sure, I expected a mention in Armand’s From the Editor section. I figured there might even be a picture or two of me.

On the day the magazine arrived, I walked to the post office to pick up my mail and shoot the breeze with the people working there. They handed me the package, and I joked that it must be paperwork I need to fill out for my retirement.

When I got home, I opened it and found several copies of Traces. I pulled it out and was shocked when I saw the cover photo. It was a picture, taken by Heather Seitz-Tankersley, of me at a baseball game in Chicago. I think it’s the best picture ever taken of me! I then opened the magazine and tears started running down my face. I was stunned.

I remember all those “photo moments” as if they were taken yesterday. I just sat there in tears and read the entire magazine. And it continued in February with Bret Ridgway’s tribute.

The entire magazine was like a eulogy that I was alive to appreciate. THANK YOU for that!

Armand and Marianna then made sure that I would attend the five-day, Marketing University Intensive that was taking place at their house. In the evening of the third day (Wednesday) of the Intensive they hosted a retirement party for me. Bill went all out and did a fabulous job of decorating the house. We had a great time and great food. Stories were told and memories of the past 20 years were shared. Most were true but some were embellishments of the truth. 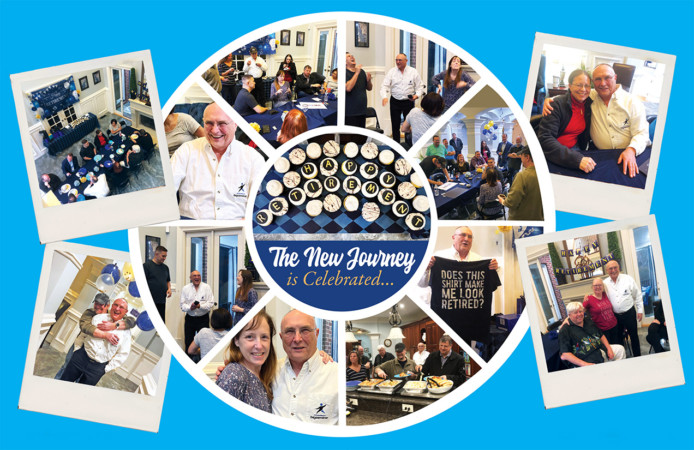 I was humbled and in awe when I saw just how much people thought of me. Some people made great effort just to be there. Kay drove 6+ hours and Mike and Susan drove 8+ hours to be there for the party! JJ and Craig flew in for the party. It gave true meaning to the fact that we are family.

I first became aware of Armand in 2001 when I purchased his eBook Generator software. I was impressed when I called him regarding it, and he personally answered the phone.

I met him a few weeks later at a live internet marketing event. I believe it was the 14th of September 2001 (right after the planes started flying again). Within a few weeks we were doing business together.

At that live internet marketing event, I was talking with friends about an eBook software program I had bought. Someone asked if it was the program Armand Morin created. I told them it was. They then asked me if I was aware that Armand was at this very event. I was not aware, so I asked them to introduce me to Armand.

Now, whenever I attend any live events, I always try to sit in the front row. I was sitting in the front row at this event. But some- how, after talking with Armand and coming in from break, I ended up sitting in the back row with him. This was not some- thing I had ever done before, and I have no idea what led me to do it at this event. It doesn’t matter why I did it…the fact is, it changed my life forever!

Armand and I sat together during the remaining days of the event, but we did not say much to each other.

I am a prodigious note taker at events. It was not unusual for me to fill up one or two legal pads. This event was no exception.

As the event was winding down, I commented to Armand about the valuable information I had learned at this event. He agreed with me and said he had learned enough to make several million dollars. I glanced over at his note pad and exclaimed, “you only have a half page of notes!” He looked at my full pads and said, “Oh, you must have listened to the speakers.”

I responded, “Of course! Who did you listen to?”

He looked at me for a few seconds then said, “I listened to the questions the audience asked. When they asked questions that stumped the speakers, I took note of it because that was a need that I could create a product to fill.”

At that moment I knew he looked at things differently than anyone else. Over the years I watched Armand create several products and trainings that addressed the questions asked at that event. Those products went on to generate millions of dollars for Armand.

I never thought I would retire. I always planned to work until I dropped, but as I moved into my 70’s I saw more and more friends and family passing on. I decided that I wanted to spend more time with those remaining. So, I made the painful decision to call Marianna and tell her I would be retiring. It was a sad moment, but it was the right decision for me.

Rest assured, I have not gone away. You will still see me around and may even hear from me from time to time. After all, we are family!

George Callens has been on the Internet since 1996. He has worked, full time, with Armand since 2003 and is currently the Chief Operations Officer for Armand Morin Network INC.. George is also one of the founders and partners of Payblue shopping cart.